I go through a conversation about dropouts with pretty much everyone I build a frame for - and this isn't meant to replace that conversation, but it's a good background on what I usually use and what the pluses and minuses are for each option. This is rear (frame) dropouts only, fork dropouts are a lot less interesting in general (if you disagree I'll do another post on them, just let me know in the comments).

Dropouts I commonly use now: 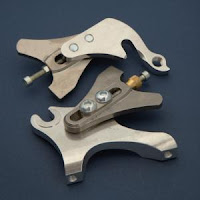 -Paragon sliders. These are a mainstay for folks who want to singlespeed, singlespeed/geared, or use an IGH like a Rohloff. They allow all kinds of axle options and are super reliable - they won't slip, creak, break, or get scored up by the clamp bolts. In short they are pretty much set and forget. Back in the day they were cool and sexy, now they're everywhere so nobody will be impressed. If I were building myself a singlespeed, these are what I'd use. They will add about 150g of weight to your frame over a non-adjustable dropout. 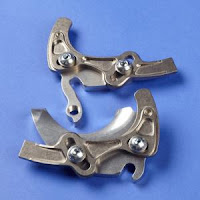 -Paragon rockers. Another singlespeed/geared option from Paragon for folks who don't like the look of the sliders or just want the brake caliper tucked between the chainstay and seatstay. Also pretty reliable though they are a bit more complex than the sliders and don't have a tension screw for fine tuning chain tension (IMO not a big deal). Adds 150g or so as compared to a non-adjustable. 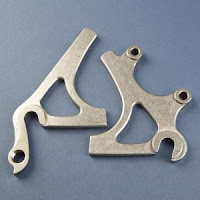 -Paragon DR2010. The plain-jane basic disc dropout that I use for almost every geared mountain bike I do. Light, strong, reliable, easy to work with - nothing to hate here. If you want to carry loads on a rear rack or mount fenders, these aren't ideal - go with the low mounts.

-Paul Horizontals. If you're old school and want rim brakes, or you want a track bike or fixie with no brakes at all, these are super cool and scream street cred, since PaulComp makes badass stuff. They also feature a TON of adjustment (something like 40mm) if you never want to have to add/subtract chain links when changing gears. Note that I will do these with a disc tab if you insist but it's really better to just use some dropouts that are intended for disc use. 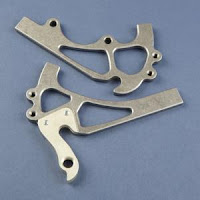 -Paragon low mount. If you like the disc tab tucked into the gap between chainstay and seatstay, and/or you want to carry racks and run fenders, these are great since the caliper is out of the way of the eyelets. They have a replaceable aluminum derailleur hanger, which is a bit of a bummer since steel dropouts really don't need replaceable hangers, but c'est la vie. Available in "expedition" versions with extra material if you're paranoid or carrying huge loads. 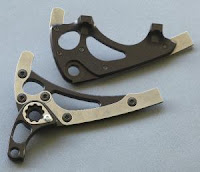 -Paragon Polydrops. These are currently only useful for geared bikes but they offer a couple of axle options, a split for future belt drive compatibility, and the cool factor of being the newest thing to come out of Mark's (Paragon owner) crazy brain. I have a set on Stupidmobile and I like them just fine, though I'd probably just use the low mounts or 2010s for a plain-jane geared hardtail. Not great for folks with heel/chainstay strike issues as they are super long and will be right at ankle-bone distance for some riders. 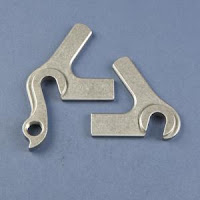 -Paragon DR2007 (and variations). For road or 'cross bikes with rim brakes. These come in a variety of angles for different sizes of frame - nothing special to say, they just work.


Other stuff I've used in the past:

-Breezer vertical dropouts. I used to use a ton of these but I don't much anymore because A) they're more work for me than plate-type dropouts, and B) many people end up having problems with compatibility for trailers (or axle-mounted racks) and apparently a lot of my customers now have kids. Still available if you want the hooded dropout look, though.


Stuff I will only use under protest/refuse to use:

-Black Cat Swingers. I built myself a bike with these and had nothing but trouble with them - they slipped under pedaling forces unless I went nuts tightening things down, the derailleur hanger (when running geared) was so flimsy I would end crashless rides with it bent due to just shifting, and the last straw was that under heavy braking on rough/loose terrain, I kept having the rear wheel slip *backwards* at the brake side and lock the tire/wheel into the chainstay. Other people have had better luck but I've heard the same story from other builders and riders I trust, so I won't build with these.

-Socket-type/lug dropouts. I am a TIG guy, but I can competently braze with a variety of materials. So I can build with dropouts that use sockets, but I prefer not to because it's inherently limiting - I can't pick ANY seatstay or chainstay that I want, sometimes the angles are fixed, etc. If you've got a dropout in mind that you like, I might be willing to use it or I might not - drop me a line and check before you get too excited.

-EBBs. I've changed my tune on EBBs since Niner release their fine Biocentric 2 (and the PF30 version). So if you want and EBB, there you go.
Posted by Walt at 9:56 AM

Other real nice thing about the paragon sliders is the ability to change dropouts by changing the insert (like SS to D-hanger to Rohloff etc). And they have the hooded style sliders if you still like that look.

If the polydrods are only useful for geared bikes, what good is the belt drive option? Don't belts require an IGH or SS?

My assumption is that there will be a chain-tensionable insert option for the polydrops at some future date. As of now, you could not use them for a belt drive bike.

I think the answer you're looking for is EBB

Can you forge me your own unique dropouts? Wht about something made from carbon fiber? I really like the drop outs on my old bike- can you re-use those? I have this great idea for a drop-out mounted rear suspension, could you build the frame around that? I want a drop out that's welded to my rear axle and some kind of keystone system for to remove frsme sections for tire changes- how about that?

Now THOSE are some good questions!