Those roman numerals might not make sense. But man, sometimes you gotta miss a place where:

During the past year, breweries including Big Choice Brewing, Bootstrap Brewing, BRU Boulder, Echo Brewing, Gravity Brewing, J Wells Brewery, Shine, West Flanders and Wild Woods have opened in Boulder and Broomfield counties. Others such as Avery, Oskar Blues and Upslope have moved forward on opening new breweries.Several more -- including Sanitas Brewing, which plans to open a couple of blocks from Fate Brewing -- could open their doors this year.

Note that the brewery being discussed in the article is about 0.5 miles from our place in Boulder.  I used to do a birthday pub crawl on bikes in which we visited 6 or 7 breweries and never had to ride on a surface street for more than a block or so. Now I think there would be *too many* breweries to manage even a single beer at each one unless you wanted to finish the night at the hospital.

Also note that the air quality here in SLC is going back to "unhealthy" as of tomorrow. But hey, we had like 3 days of breathable air... sigh.

I promise I won't whine again until I do at least a couple of useful bike posts. Seriously. Edit: Here, I throw you bike nerds a bone. 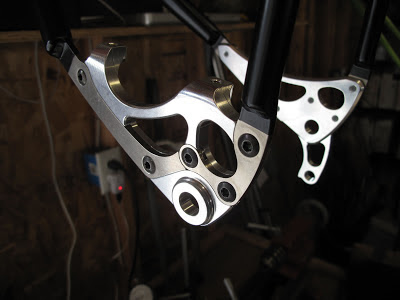 The food here is ok, I guess. I am really into cooking so we don't generally eat out though. So yes, there is food - but not because of the city.

Thanks for the update on the brewery scene here. I need to get out more.

As one of those bike nerds, I'm going to need a couple more pictures. So those are swappable for different typed of dropouts I'd guess. And presumably lighter than all steer ones?

When do we get to hear the details about those sexy dropouts?

We don't miss Boulder, but we do miss you and the wifey. When the hell are we going to see you? April?