Warning: long.
Warning: probably boring.
Warning: no action shots, unless you count one of Fuentes trying to put on his shoes.

Fuentes, Megan, and I drove to Cortez this past weekend to race the 12 Hours of Mesa Verde (no, not actually at Mesa Verde - they frown on bike races in national monuments - the actual riding was at an area just east of Cortez called Phil's World). Fuentes (pro architect) needed to meet with a client in San Luis, so we stopped there for lunch on Friday, and made some new friends. 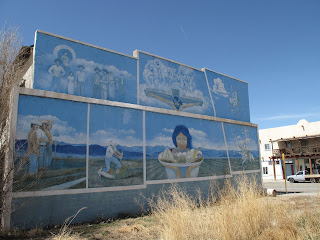 Here's a shot of the super sweet mural across the street from the R&R grocery - which is the oldest continuously operated business in Colorado - it's been open, without interruption, since 1857! I purchased bottled water and some gatorade for the race. 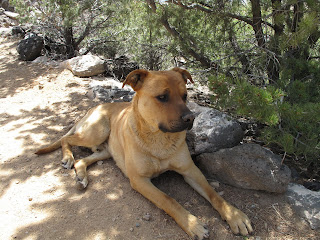 Next we decided to hike up the stations of the cross trail located in town. For the excursion, we were joined by a big red dog that we named "Rufus" - he had no tags (or collar), but was just about the friendliest and most mellow dog I've ever met. Rufus would lean on you to get pets, wait for you at the shady spots on the trail, and was a great hiking companion. When we asked in town, everyone told us that he was "the town dog" and that he didn't have a home, or an owner, or even a consistent name (we heard several, my favorite was "Cheeto"). Pretty neat stuff - Rufus was known and obviously loved by every single person who walked by. I'd like to live somewhere with a town dog someday... 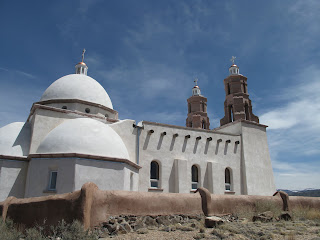 Eventually we drove on to Cortez, which is basically as far away from Boulder as anything in Colorado could possibly be - so we were stiff and sore from sitting in the car. After grabbing our race packets, we made a beeline for the county fairgrounds (free camping in the dirt!), suited up, and prerode about half the course (8 or 9 miles worth) before darkness forced a return to camp.

I knew right away that this would be a hard race, for several reasons. First, the course (a little under 17 miles) is nearly 100% singletrack, with no climbs longer than about 30 seconds, and no straightaways longer than about 40 feet. Yes, that's right, it's twisty singletrack the ENTIRE time, which means there's nowhere to relax and recover - mentally OR physically. A power course. Perfect for the tall skinny guy with no power, but c'est la vie. I hoped that my decent bike handling skills and super sweet short-wheelbase 29er would minimize the damage and keep me from embarrassing myself.

We spent the night listening to barking dogs and generators (that's what Ambien is for!) and woke up to argue about who had to do the first lap (with the Lemans start). Each of us had some pretty good excuses:
-McCalla: sprinting not good for his heart
-Fuentes: wearing road shoes
-Walt: really slow at starts 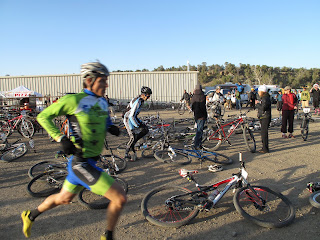 In the end, we talked Fuentes into running in his tennis shoes, then swapping to his bike shoes when he got to the bikes. This proved to be a mistake, but it was hilarious to watch him win the run, then stumble wildly through the bikes to find his, fumble with his shoes forever, then end up something like 40th.

We settled in to wait for the riders to come in - and waited, and waited. Fuentes went out way too hard, blew up, and recovered, and ended up somewhere around 15th. But our ace in the hole, McCalla, ripped the field apart on his lap and got us up to 3rd.

I spent the hour waiting for McCalla fighting the first-race-of-the-year jitters. I guess I didn't fight hard enough, though, because in the first 1 minute of my lap, I almost collided with a rider (inexplicably riding the wrong way at the very start of the lap), a dog (wandering, as they are wont to do), and a fence. Not an auspicious beginning. I spent the next hour and 14 minutes begging lapped riders to let me by - I don't think I've ever been so happy to have a bell.

Then it became a race of attrition. There were 5 VERY fast teams - the "Legends" team of Ned Overend, Dave Wiens, Travis Brown, and Daryl Price, the always awesome Honey Stinger squad led by Len Zanni and Kelly McGelky, the Kuhl/Enve Composites guys (those jerks had a ringer from Sweden who races world cups!) and the Directory/Trek team of our friends Miles Verzana and Nick Gould. And of course, we had only 3 riders, where all the other teams had 4 (this was deliberate, none of us wanted to do a duo, but we all wanted to ride more than 2 laps - honestly we were not expecting to be competing for the win!)

As Fuentes said during the race "dang it, we're just fast enough to get ourselves in trouble". There was no relaxing, no easy cruising because we were consistently within 5-10 minutes of all of those teams (I think every team was leading the race at one point or another). My second lap was awful - I was feeling pretty good until about halfway through, riding smooth - but the heat and lack of shade caught up with me and I spent the last 8 miles cramping ferociously.

McCalla force-fed me almost a gallon of various disgusting sports beverages, the cramps subsided, I finally needed to pee, and I dumped half a gallon of ice water on myself to prepare for my (and the team's) final lap.

At this point, we were leading the race, but all 4 of the other fast teams were within easy striking distance. I spent the entire wait for McCalla praying for a big gap to work with - because I knew that Kelly was coming out behind me, and I also knew he had been winning Mountain States Cup races - so I'd need all the time I could get.

Leaving the start/finish area, I saw Len entering the finish - which meant that I only had about 45 seconds, and needed to hold it for 17 miles of flat power riding.

Needless to say, this wasn't in the cards. Kelly caught me around mile 5 or 6, and I let him by, then did my best to chase. I could keep things close in the corners, but every time Kelly started pedaling, the gap stretched and stretched. In the interest of actually finishing the lap, I backed off out of the red and let him go.

But mountain bike racing is as much about luck as anything, and a mile later, I found Kelly on the side of the trail with a broken chain. He had tools and was working on it - so the chase was back on. I spent the rest of the lap trying not to freak out, riding as smoothly as I could, and doing my best to keep my head up - not easy after almost 50 miles of relentlessly physical riding. Unbelievably, nobody caught me, and I got to experience crossing the finish line for us as the overall winners of the race. I honestly think it was the coolest experience I've ever had in racing - what a feeling to roll into the finish to hundreds of people cheering and the race organizers/random people high-fiving you. I don't expect that to happen ever again, but it's an experience I'll certainly remember for a long time. 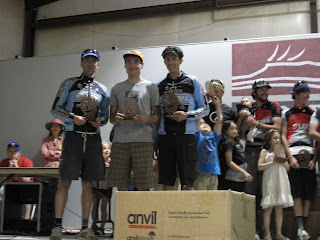 Here's a terrible podium photo (though not as terrible as the previous one). We won some neat trophies and some fun little prizes (no money, the proceeds of the race all go a mentoring program, and I'm glad they do), and I got to stand on the stage with some of my mountain biking heroes. Best day of racing ever? At least until next year...

McCalla cannot be trusted to act normal on podiums, and this was no exception. This was the best picture of him I have, no joke. He wore an awesome orange "Ricky Rudd" NASCAR hat... sheesh. Good thing he's so fast, or I'd have to kick him off the team.

And yes, Wiens and Ned's kids came up on stage with them. It was very cool. Those groms are going to be FAST.

Megan had a great race as well on her brand new 29er (maybe she'll do a guest post with her story?) and her team finished 2nd overall in the 4 woman category - against a legends team that included Julie Furtado and Susan De Mattei!
Posted by Walt at 8:11 PM

I can't believe it!! best thing I read all day. Congratulations, Walt!

Walt, thanks for the nifty story. That was great!

And about McCalla, I'm pretty sure he was sent from the future, but not in a 12 Monkeys or Terminator sense. Of course the future isn't really like any of those examples, because in the future individuals like McCalla are sent to the past to remind our future-selves to lighten up.

It's a pretty damn serious place in the future, and any so-called "humorous historical documents" McCalla can create, well then, his job is done.

On a related note, President Obama is also from the future. Sure, he was still born in Hawaii, but in the future it's more commonly known as Special Administrative Region 3.

I think this is probably the best theory I have heard about McCalla's behavior, ever. Makes perfect sense...

congrats, and a great race report. sounds like fun racing against those legends and beating most everyone!