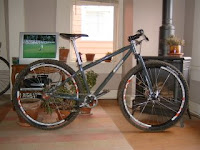 So, I built a nice frame/fork combo for Chris, my second 650b customer, and I thought I'd share some thoughts (and pictures). If you want Chris' (admittedly initial) impression, click over to his blog.

Thought 1: I love options. I have to wonder about the folks who bash on 29ers, or full suspension bikes, or semislicks, or 650b, or whatever online. I'm really starting to think that these kinds of people just live for controversy. Well, I don't, and I think the fact that we have quite decent selections of rims/tires for everything (20", 24", 26", 650b, 29") is freakin' awesome. I love my 29er. I love the fact that Chris can get a 650b setup that he likes, even though a 29er wouldn't work out well. I love my 24" dirtjumping bike. 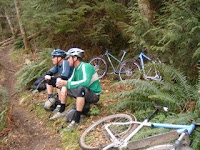 Thought 2: It's scary to build something you've never ridden. I'm not planning to build myself a 650b setup (I'm WAY to big for it to make sense), so building a frame for Chris (or anyone on 650b) is an exercise in trusting in your intuition. I know the *numbers* on the frame geometry are right where I want 'em, but the 650b wheels are the X factor. A little scary for me when I go out on a limb like this - the worst situation, for me, is someone who isn't happy with their bike. If I was in this for the money, I would have quit to sell subprime mortgages about 3 years ago... To be fair, the wheel size isn't *totally crazy* or anything - right in between 29" and 26". So it's not like I was doing anything revolutionary. But still - it's something new to me, and as such, it's a little scary/exciting. But if I just cranked out 29ers all day, I'd probably go insane.

Thought 2b: Someone mentioned to me recently that other than Wes, I have probably built more 29ers by hand than anyone else on earth (I'd estimate about 300 at this point). Pretty neat, I think. Of course, I could easily be wrong about that - there are nutty framebuilders you and I have never heard of cranking stuff out in their Unibomber cabins in Montana who have probably done 3000. But I'm the second-place non-crazy 29er builder, anyway. Or at least the second-place non-bearded one.

Thought 2b/b: Talk about parenthetical. The subject of beards has me sore (literally). I am "blessed" with, shall we say, abundant facial hair growth. My wife, sadly, believes that this is more of a curse, and thus I must shave, daily. Until recently, I was able to use a nice, safe, high-tech electic razor. But my hirsutitity (new word!) finally overcame the best that the titans of the shaving industry could offer (coincidence? I think not, look around at some of the bearded framebuilders out there...my stupid face is trying to follow along), and I have had to learn to shave with a (ominous music) *safety razor*. Now, most of you probably learned this from your dad when you were, like 5. Not me. I am terrified of sharp things, and even more terrified of sharp things close to my throat (in fact, so terrified that I sported a long, scraggly beard through most of high school. Yes, I was quite popular. Thank you for asking.) When I hit my 30s, I sort of assumed that I'd never have to deal with blades and foam and little pieces of TP and all that. I mean, my body should just slowly and gracefully go downhill (with bigger ears, and nose, and maybe some ear and nose hair) from here, right? Extra facial hair? Pfah! Not possible.

I was wrong. So wrong. When the cost of replacing the electic shaver head (a ridiculous $20) every month or so became too much to bear, I was finally persuaded (by Sarah) to shave with a, er, uh, ladies razor that she had handy.

Wow. I was amazed A) by how easy it was to shave, and B) how much my face bled all over the place afterwards. Thank god she didn't have any aftershave...

Um. Long story short, I am slightly more cleanshaven and somewhat lacking in blood these days. Also, I purchased some more manly disposable razors. The retro grouch in me kinda wants a straight razor, but I might *really* cut my throat with that.

Back to 650b. If you read all that, you're even more bored (Sarah's working late again) than I am.

Thought 3: Industry support for 650b stuff has been fantastic. There are 3 or 4 rims that are offroad-suitable, more tires are coming this summer, the fork situation (between kinda-compatible 26er forks and the WB 650b model) is under control, and Ventana is even making a 650b rear triangle for 4 or 5" travel (I'm building one in a few weeks - stay tuned). Good to see that the curse of the 29er (ie, nobody believing it was a legit format for a bicycle) isn't holding the 650b thing back. And kudos to Kirk Pacenti for kickstarting it. That takes some balls, and I hope he makes a bundle for sticking his neck out.

Great looking bike, Walt!
Considering how big the "B" wheels look in comparison to the frame, its no wonder a 29er wouldn't work for him.

You must've stolen my facial hair. I shave once a week. I'm 27 and can't even grow sideburns.

just curious about your opinion, i know there are more factors than those 3 numbers, but i've been enjoying my 29er for over a year.

just thinking ahead to my next purchase, which will probably be FS.

Someone asked about my WW this weekend and commented that he read, "Walt has a large cult following". I had no fuckin' reply to that. Till I read this blog after reading "How to Build a Cult". http://www.mindpowernews.com/BuildACult.htm
Then it all made sense (in a backwoods conspiracy seeker kind of way w/ odd correlations to Pat Morito and the Karate Kid). Five minutes wasted?! I just wasted an easy 20 minutes examining your comments about shaving and beards. :)

Wow. Walt's bored. And I read it, I must be bored.

The cutoff for me is usually about 22.5-23" toptube length. It's not that hard to create a decent amount of standover for most folks, so if I were building a bike for you to ride in *most* areas of the country (though not New England) I'd probably put you on a 29er.

My general belief is that you should ride the biggest wheels you comfortably fit on.

For full suspension bikes, the logic changes a little bit, since standover starts to be more of a problem and chainstays can't get quite as short - I probably wouldn't recommend a FS 29er to anyone who wanted a toptube <23.5" or so.

The thing is, it's all about context. Some folks are 6'4" and would hate a 29er, some are 5'5" and love theirs. It's all about riding style and terrain, not just whether you end up with toe overlap or not.

Bite me! _I_ read _your_ boring blog, and sometimes I even comment!

Hopefully I will have time to build you a cross bike soon...

The 3rd ride, which included one of my favorite trails (the three pigs), was confirmation of my initial impressions - you nailed it Walt. It was pure joy zipping through the twisty stuff.
Did you mention facial hair?
http://bp1.blogger.com/_RhrvvUKCAQM/SAWHQVdNZZI/AAAAAAAAABA/BsPNE2qWVUQ/s1600-h/IMG_0466.JPG

I really dig that fork. The bike is gorgeous. Fine work.

Yeah, I'm may be more bored than you, but my first thought is you may be drunk!!! Great post. You've been slacking lately. I'm 37 and can't grow anything more than a scraggly, hippy beard...I'd fit right in here in Humboldt county, except I'm kind of a redneck here...unless I was anywhere else then I'd be a flaming liberal...go figure. I love 650B. You have my numbers so you know I have short legs so I think my next geared mountain bike will be 650B. The industry does seem to be very accepting of it. Lots of support at NAHBS. I'm slowly making my way up that waitlist...

Jude, I would never, ever drink and blog.

Old Vine Zin with Sarah at the lab (I brought her dinner). It was quite quaffable.

But hey, apparently I'm much more interesting when buzzed...

I love my 650B Surly 1x1 bastard and agree with the 650B for height challenged folks. But I'd also suggest that 650B is perfect for a travel bike. I have an S&S coupled 29er and it is a major PITA to get the wheels in the travel case without removing the tire. The 650B wheels just pop right in there, no sweat. So keep that in mind . . .

Disposable razors are the debbil. Get yourself something decent like a Mach 3 and you won't cut yourself nearly as often.