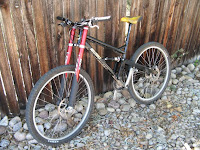 So I've been through a few iterations, and some various forks (at last count, a WB135, A Lyrik w/eccentric hub, an old Hanebrink, and a modified Y2K Marzocchi Junior T) but I think the setup is now finalized. This sucker takes corners like it's on rails and the combo of the big wheels (with beefy dual-casing Nevegal tires) and 6"/6.5" of travel front and rear make it pretty much capable of running over anything you're dumb enough to hit. I've named this model the El Guapo ("Jefe" was taken...) 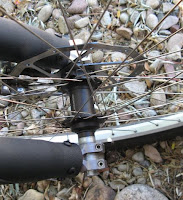 I'm really happy with the new fork - Feldman got it off Craigslist in trade for some old crap brakes, and I sent it in to WB for a new left stanchion and some seals and bushings (as well as the fork guards). The fork (which is essentially the same as the current Groove 180 and Groove 200 forks, except for it's 2001 era damping leg) is perfect for 29" wheels, because it's got plenty of clearance under the crown for the wheel (you do have to raise the lowers all the way up, though) and it's got a sweet 120mm axle spacing setup - which lets you use a 120mm hub, or a DISHLESS 110mm one (which is what I'm doing, since I already had a 110 wheel). Very cool, especially for this application, since I want the strongest front wheel I can manage to build. Combined with the 150mm/12mm thru-axle rear, this is probably one of the burliest 29er wheelsets you can get. I could have gone with Kris Holm hubs over the Rhynolites, but I'm only 150 pounds, so I figured the Rhynos would be fine.

I had several concerns when designing this sucker, notably:
-Lateral stiffness. I can honestly say that this frame is the stiffest full suspension frame I've ridden. The combo of the massive front triangle tubes (45mm downtube, 38mm toptube, 32mm seat tube) and the 22mm axle pivot (using a sweet Primo bottom bracket from Dan's Comp) mean that there's practically no lateral flex or play. Honestly, I think it's almost as stiff as a hardtail.
-Reasonable wheelbase and chainstay length. Given that I wanted to run a front derailleur, and I was limited to crappy E-type ones (the "e" is for "excrement") the chainstays had to be a little longer than I could have otherwise made them (they're 440ish mm, or about 17.3"). I will probably end up doing another rear end with <17" chainstays at some point - there's plenty of room to do it, if I throw the lousy front derailleur out the window. The bike manuals and wheelie-drops fantastically (or, as well as I can manual or wheelie-drop anything) so I think I made this goal as well. 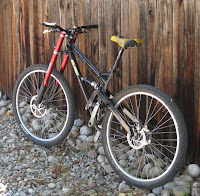 -Reasonably light, indestructible. I'm not going to say nothing can break this frame, because nothing survives being run into a tree, or a parked car, or whatever at 20+ mph, but I think I can reasonably expect to still be riding this sucker when I'm 50 years old. The front end is made from a great tubeset called Supertherm, which is essentially True Temper's high-end double butted OX Platinum tubes, made 40% thicker. You would have to be an absolute monster (or do something unbelieveably suicidal) to damage those tubes. The rear end is bulletproof .75"x1.5"x.049" 4130 cromoly, and trust me, it's not going to have any durability problems either. Best of all, the whole thing weighs about 11 pounds with the shock, which is pretty comparable to a conventional/disposable aluminum downhill frame - and I bet this sucker is more durable in the long run. The bike complete, as shown here, is only 37 pounds (admittedly, it's 38 with "real" downhill pedals). Hell, I could build it up with a WB F135, and some nicer parts and a shock with a lockout (or some propedal valving), and it'd be a reasonable 32-33 pound trail bike.

Basically, I love this thing to death. It's probably my proudest framebuilding accomplishment. I think long-travel steel bikes make a lot of sense (durable, repairable, not any heavier than the other stuff out there) now that I've built it and ridden it. Mucho thanks to Feldman for design work, creative ideas, and Craigslist scumbaggery. And a big thank you to Ben at True Temper for providing some very unusual tubes for the project. Eric at WB deserves a round of applause as well for his quick work getting the fork repaired and tuned up.

I think the 29" wheel thing is going to find it's way onto the radar for freeride and downhill in the next few years, if my experience is anything to go by. And I promise this will be my last long, annoying post about this bike. Really.

Oh, a final note. You can buy this bike (well, not this one, but one built for you) - custom geometry, any amount of travel (within reason), blah blah blah. $1700 gets you a frame, or $2k gets you a frame with fancy schmancy shock of your choice. Party on.
Posted by Walt at 3:02 PM

Yeah, but they just stole it from the 3 Amigos like I did. So I don't think there's any real legal issue there.

Plus, I was a fan of the 3 Amigos before Titus even, like, existed, yo.

"Canyonero" was a much better name... but I guess I'm not that objective.

Would you say there is a plethora of pinatas? Do you even know what a plethora is?!?